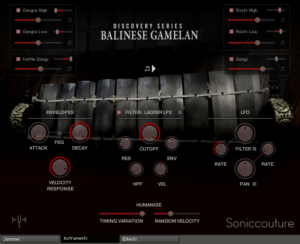 “THE MUSIC OF GAMELAN

Often translated as “orchestra,” gamelan is an ensemble of instruments from Indonesia, typically Java or Bali. The music itself is often characterized by bright, metallic, percussive qualities, distinctive and complex tuning, the rich layering of instruments, and its cyclical form.

Ensembles differ significantly from one another but are made up of a combination of beautifully crafted metallophones, xylophones, drums, gongs, bamboo flutes, strings, and even vocals. Instruments are built and tuned for specific ensembles, so tunings can differ considerably between gamelans. A peculiarity of the Balinese variant is that each instrument is paired and slightly detuned relative to its partner, resulting in a natural chorus effect.

The instruments in this release were sampled from the London Symphonic Orchestra’s Semara Dana Gamelan Ensemble in exacting detail. Their unique timbres and textures have been faithfully recreated through a painstaking recording of numerous velocity layers – a true labor of love by creators Soniccouture.

This instrument focuses on compact versions of the tuned instruments, split into three categories: The big gongs, the paired metallophones and the kettle gongs.

The gongs – the jegog, the calung, and the penyacah – are responsible for basic structure and melody, and come in detuned pairs. This instrument includes both the upper and lower groups of these detuned pairs, with easy control over volume and panning from the KONTAKT interface.

The gangsa is made up of paired metallophones, including the ugal, pemadé, and kantilan. These are the busy elaborate instruments that decorate the melody with fast interlocking patterns. Again, simple access via the KONTAKT interface allows adjustments to the volume and panning of these detuned pairs.

The third element in BALINESE GAMELAN is the kettle gongs, including the trompong and the reyong. These instruments have various functions depending on the type of gamelan in which they’re used. Sometimes they are used for melodic decoration or solo passages, other times they can be used for very quick and elaborate parts, similar to the gangsa.

Balinese Gamelan now lets you mix gangsa, kettle gongs, gongs, and roots in a single KONTAKT instrument. It also features an all-new generative arpeggiator, The Jammer, which allows the sequencing of various parts of the ensemble from a dedicated interface. We’ve also added a full effects page, featuring our modular insert chain and custom Space reverb processor. A dedicated tuning module now allows switching between original and concert pitch, and a fully adjustable ombak gives you full control over the beat frequency between detuned pairs of instruments.”