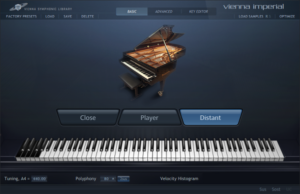 “The most realistic sampled piano ever created.

The Vienna Imperial virtual grand piano is a class of its own. The venerable Bösendorfer Imperial 290-755 that our team hosted at the Silent Stage for two months was equipped with the famed piano manufacturer’s CEUS technology (details below), which allowed for the most precise and by far most extensive piano sample recordings ever conducted in the history of music technology. 1,200 recorded samples per key represent a magnitude of sampling detail that has been unthinkable up to now.

The innovative implementation of meticulously recorded pedal-up and pedal-down notes in up to 100 velocities, comprehensive sympathetic resonances, and multiple release samples make the Vienna Imperial the most realistic sampled piano you’ve ever heard.

No less importantly, the Vienna Imperial is so easy to use. The Basic View of the user interface lets you choose between three recording positions (close, player, and audience). The Advanced View gives you quick and easy access to more control options such as convolution reverb, EQ, pedal noises, sympathetic resonances, stereo width, MIDI sensitivity and more. But don’t get fooled by the slick interface – under the hood is a new proprietary piano engine that has been specifically designed to drive this massive amount of sample data and processing power. And when all is said and done, all that matters is how it sounds. Dare we say, the “Passion of the Grand” has never been more real.”